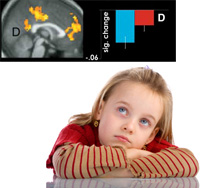 Several news articles have come out today which seem to imply that a recent Science report's main finding is that the mind wanders for a purpose (see this Forbes article), and that "daydreaming improves thinking" (see this Cosmos article). These are typical of fabrications used by popular science journalists to pique the public's interest.

Mason, et al. 2007 (the Science article published today) did not say that the mind wanders for a purpose (though they speculated that there may be one), and specifically mentioned that "the mind may wander simply because it can". Also, I could not find anything about daydreaming improving thinking in the article, except a short sentence about daydreaming possibly improving arousal. (A slap to the face will probably improve arousal; will the next headline be "face slaps improve thinking"?)

The two popular news articles mentioned above present these very speculative statements from the article not only as fact but also as the main results of the research, which I find to be disingenuous.

As a researcher in the area, I would say these are the main points to take from Mason, et al. 2007:

Why did these popular science news articles get things so wrong? Well, as you can see, a lot had to be covered to (hopefully) get it right. It's understandable if some details are left out. However, adding false information or misrepresenting the findings (as the two news articles cited above did) is unacceptable. Science journalists can do better than this.