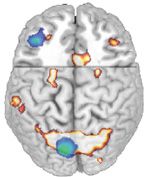 My latest scientific publication is entitled Selection and maintenance of stimulus–response rules during preparation and performance of a spatial choice-reaction task (authors: Schumacher, Cole, and D'Esposito). It is a study using functional MRI with humans to investigate how we prepare for and execute willful action.

In this post I'll attempt to translate the article's findings for both the layperson and the uninitiated scientist.

What is willful action?

Willful action is a set of processes in direct contrast to automatic, habitual, processes. We can say with certainty that you are using willful action minimally when you are resting, brushing your teeth, driving to work for the thousandth time, or while performing any task that is effortless.

Willful action is necessary during two types of situations.

First, when you are attempting to do something for the first time (i.e., when you've had little practice at it) these processes are necessary for accurate performance. Think of the immense amount of effort while learning to drive. At first willful action was necessary, but later this need subsided.

Second, when two potential actions conflict in the brain willful action is necessary to overcome the incorrect action. The conflicting action may originate in an inappropriate desire, a habitual action that is no longer appropriate, or a natural tendency to perform one action rather than another.

In this latest publication we have used this last case (conflict due to a natural tendency to respond in a certain way) to investigate willful action.

A number of brain regions were involved in the hard mapping versus the easy mapping (i.e., when willful action was necessary). These included dorsal prefrontal cortex, premotor cortex, insula cortex, and parietal cortex (among several others). This set of regions has been previously called the cognitive control network (Schneider & Chein 2003). These regions are consistently involved in tasks requiring willful action (and cognitive control in general).

The study was specifically interested in which brain regions are involved in preparation for willful action (and, in this case, overcoming spatial incompatibility). Before each spatial pattern a cue appeared such that the volunteers knew if the upcoming pattern was going to require willful action or not. By looking at increases in brain activity for the hard versus the easy cues we could infer which brain regions were involved in preparation.

This could mean one of several things. First, the network of regions involved in willful action may be a general cognitive control network (as suggested by Schneider & Chein), such that any non-habitual thought (including preparation) will involve these same regions. Second, preparation may simply be a matter of imagining (simulating) the future action, such that the same regions are active during these simulation events.

I am of the opinion that there is a single cognitive control network within cortex that is involved whenever willful thought or action (including working memory) is necessary. There are many situations in which only parts of this network are involved, which reflects the specialized nature of the network's components. However, this network is more often active as a whole than in parts (see Wager & Smith 2004).

One needs to be careful when considering a single region or network as underlying all willful thought and action. My claim is not meant to be the final word on the neural basis of cognitive control. Instead, it is meant to narrow down the possible places that cognitive control could be localized.

Once localization of cognitive control processes is firmly established it will be time to clearly distinguish the roles of each region within the network and, ultimately, to discover the neural mechanisms underlying the will itself. This study is just one of many that are making progress on this front.