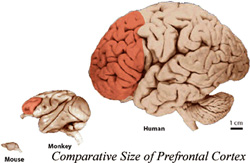 Most neuroscientists don't use human subjects, and many tend to forget this important point:
All neuroscience with non-human subjects is theoretical.

If the brain of a mouse is understood in exquisite detail, it is only relevant (outside veterinary medicine) in so far as it is relevant to human brains.

Similarly, if a computational model can illustrate an algorithm for storing knowledge in distributed units, it is only as relevant as it is similar to how humans store knowledge.

It follows from this point that there is a certain amount of uncertainty involved in any non-human research. An experiment can be brilliantly executed, but does it apply to humans?

Circumventing this uncertainty problem by looking directly at humans, another issue arises:  Only non-invasive techniques can be used with humans, and those techniques tend to involve the most uncertainty.

For instance, fMRI is a non-invasive technique that can be used to measure brain processes in humans. However, it measures the oxygenation levels, which is only indirectly related to neural activity. Thus, unlike with animal models, measures of neuronal activity are surrounded by an extra layer of uncertainty in humans.

The benefits of animal or computational modeling are obvious. You have exquisite control over the experimental situation, and fuller knowledge of the underlying processes because of invasive abilities.

Also, animal neuroscience faces the problem of ballooning uncertainty as the behavior of interest becomes more complex and unique to humans (i.e., cognitive in nature). For instance, the best animal models for language are non-human primates and song birds. Can we really assume that these animal models perform the same kinds of processes I'm using right now to write this sentence? (I've never written that sentence before, and like most complex sentences, it's most likely never been written in the history of the universe.)

Another promising trend in human neuroscience is decreasing uncertainty of the experimental observations. Perhaps ironically, animal models are providing the means to understanding these non-invasive signals. For instance, monkey neurons have been recorded during non-invasive fMRI such that a relationship could be established.

Ultimately human and non-human neuroscience are complimentary. Ideas first formulated and operationalized with computational models have framed many human studies, facilitating discoveries. Similarly, animal models have allowed for discoveries dependent on invasive techniques, which were immediately applicable to humans (e.g., because of evolutionary conservation of certain cell types).

Together, the two approaches will continue to push the cutting edge of progress in neuroscience.

As scientists with a common goal of understanding how the human brain functions, those focusing on human and non-human neuroscience should respect each other's methodological approaches, integrating across them where possible in the name of progress.