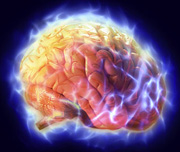 This post is part of a series chronicling history's top brain computation insights (see the first of the series for a detailed description).

Galvani (whose name inspired the word 'galvanize') discovered that electrically shocking frog nerves made their muscles move. Rolando used this same method to stimulate cortex in the brain.

As has often occurred in history, the latest and most mysterious new technology was used to explain brain function. Here, at the turn of the 19th century the brain was "explained" as a mysterious electrical device. Later it will be "explained" as a telegraph with its many communicators (neurons) and wires (axons). Then it was described as a telephone network, with switchboards acting to control the flow of information. Eventually, with the cognitive revolution, it was compared to a computer. Finally, today, its complex and distributed network architecture is compared to the internet.

Though each new comparison is always premature and inadequate, new insights nonetheless seem to derive from each analogy. What new technology of tomorrow will be used to describe brain function?

Implication: The mind is implemented in an electrical machine-like organ.