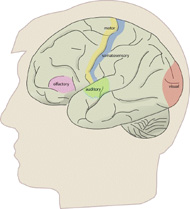 Bouillaud and Broca discovered patients with frontal cortex lesions who had speech problems. Fritsch & Hitzig discovered primary motor cortex; a specialized chunk of cortex specifically for motor control. Broca believed that all brain functions would be localized eventually, and held the brain area he discovered (now termed Broca's area) as an example. It was found that all sensory modalities have dedicated chunks of cortex, called primary sensory areas.

The origin of the concept of localizing brain function, phrenology, added discredit to the practice. Phrenology claimed that differences in localized brain function were reflected in bumps on individuals' skulls. Once it was clear that phrenological findings were not replicated between individuals the practice was labeled a pseudoscience. Unfortunately, localization of function applied without the fallacies of phrenology was not spared the renewed skepticism of many scientists.

Today localization of function is well established, especially in primary sensory-motor regions. Functions have also been localized within association cortex, though much work remains in understanding how such localization arises. Insights within the last 20 years have led to a more sophisticated view of how functions arise in association cortex involving network interactions (see future insight posts).

Implication: The mind is implemented in an electric organ with distributed and modular function.