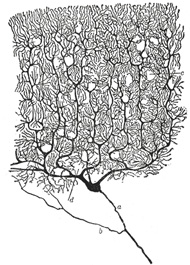 Golgi, a prominent 19th century biologist, argued that the brain is one unified reticulum (or web) of neural tissue, much like the circulatory system. However, Ramon y Cajal came to a very different conclusion using Golgi’s very own silver chromate staining technique. He argued that this tissue web was composed of separate cells. Later studies showed (using the electron microscope) that Ramon y Cajal was correct.

Some have argued that Golgi was partially correct since electrical synapses (gap junctions) exist in small number in the brain. However, even with gap junctions the cells’ plasma membranes separate the two sides of the synapse, which Golgi’s theory did not predict.
Looking carefully at his stained neural cells, Ramon y Cajal postulated that nerve signals travel in one direction (from dendrite to axon). The dendrite (top), cell body (dark central spot), and axon (bottom) can be clearly distinguished in the included image of a drawing by Ramon y Cajal. He was unable to test this prediction himself, but he turned out to be correct once again.

Implication: The mind is implemented in an electric organ with distributed and modular function consisting of neural units.