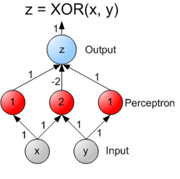 Pitts & McCulloch created the first artificial neurons and artificial neural network. In 1943 they showed that computational processing could be performed by a series of convergent and divergent connections among neuron-like units. In 1947 they demonstrated that such computations could lead to visual constancy, in which a network could recognize visual inputs despite changes in orientation or size. This computation is relevant for many topics besides vision.

More profound than the visual constancy network was the proof of concept it represented. As illustrated in the above figure, multi-layered perceptrons (as networks of converging and diverging neuron-like units came to be known) can compute logical functions such as AND, OR, and XOR.

This insight provided the first clear glimpse of how actual computation might be carried out in the brain via the many convergent and divergent connections already found in its anatomical projections.

Implication:  The mind, largely governed by reward-seeking behavior, is implemented in an electro-chemical organ with distributed and modular function consisting of excitatory and inhibitory neurons communicating via convergent and divergent synaptic connections.