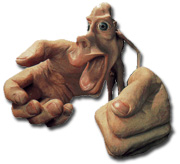 Prior to performing surgery, Wilder Penfield electrically stimulated epileptic patients' brains while they were awake. He found the motor and somatosensory strips along the central sulcus, just as was found in dogs by Fitsch & Hitzig (see previous post). The amount of cortex dedicated to a particular part of the body was proportional not to that body part's size, but to its fine control (for motor cortex) or its sensitivity (for somatosensory cortex).

Thus, the hands and lips have very large cortical spaces relative to their size, while the back has a very small cortical space relative to its size. The graphical representation of this (see above) is called the 'homunculus', or 'little man'.

Penfield also found that stimulating portions of the temporal lobe caused the patients to vividly recall old memories, suggesting that memories are transfered from the archicortical hippocampus into neocortical temporal lobes over time. 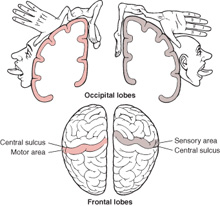