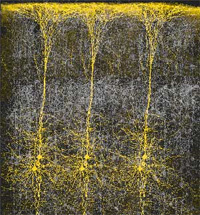 The neurons with these similar 'receptive fields' are organized vertically in cortical columns. Mountcastle distinguished between mini-columns, the basic functional unit of cortex, and hyper-columns, which are functional aggregates of about 100 mini-columns.

Hubel & Wiesel expanded Mountcastle's findings to visual cortex, discovering mini-columns showing line orientation selectivity and hyper-columns showing ocular dominance (i.e., receptive fields for one eye and not the other). The figure below illustrates a typical spatial organization of orientation columns in occipital cortex (viewed from above), along with the line orientations corresponding to each color patch.