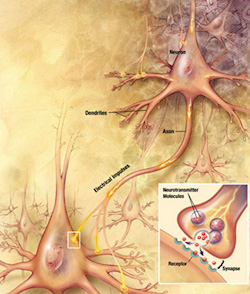 Sherrington's insight into the network nature of neural interactions is still at the cutting edge of neuroscience. It's ramifications are vast and complex, and we will still be working to understand the implications of this insight for decades to come.

Sherrington himself was able to prove that opposing muscles on the limbs inhibited each other via network interaction in the spinal cord. Also, it was found that timing of muscle movements is controlled by negative feedback via local neuronal networks. These spinal cord networks were an essential proof of concept for Sherrington, but they pale in comparison to the complexity of network interactions recently discovered in cortex, basal ganglia, and cerebellum.

Implication: The mind is implemented in an electric organ with distributed and modular function consisting of excitatory and inhibitory neurons communicating via synaptic connections.